Butter is a soft, yellow-hued, edible emulsion of butterfat, water, air, and sometimes salt. It is made from the churning of cream and is used as a spread as well as an important ingredient in cooking and baking. Margarine is an inexpensive alternate to butter, made from oil or a combination of oils through the process of hydrogenation. Many people prefer margarine over butter because it is lower in fat and cholesterol than butter.

References to butter date back to as early as the ninth century B.C. in India, but its “invention” is credited to the nomadic tribes of Asia around 3500 B.C., although the first batch probably came about by accident. It is assumed that when the people of these tribes strapped bags containing milk onto their persons or saddles as nourishment for a journey, the resulting motion of the ride churned the milk. If the weather was cold enough, a bit of fat rose to the top of the bag and the result came to be butter. On the other hand, if the weather was too warm, the result was what came to be cheese. The use of butter eventually spread westward when these Asian peoples invaded the lands of the Near East and Europe.

Eventually, butter began to be manufactured in vertical churns by other developed civilizations. A picture of a primitive churn is evident in a Sumerian bas-relief dating from around 3500 B.C. One of the first written references to the substance comes from India in the form of a ninth-century etiquette manual. It suggested that Hindu brides be given milk, honey, and butter on the day of their wedding. The manuscript also mentioned greasing the wheel of the bridal carriage with butter to ensure a trouble-free marriage. Because the cow is regarded as a sacred animal in the Hindu religion, butter has long played an important role in Indian cuisine and is mentioned specifically in religious tracts. In neighbouring Tibet, butter made from the milk of yak was sometimes smeared on religious statues.

Soon butter became common to cultures that relied on the domesticated cow for sustenance, but it could also be made from the milk of sheep and goats. Although Greeks and Romans were not fond of rich, dairy-based foods, the word “butter” is derived from the Greek term button, meaning “cow’s cheese.” The term later found its way into Latin as butyrum. Celts and later the Vikings eventually became devotees of the substance, and by the late Middle Ages, it was a staple in the diets of many Europeans and a valued trading commodity. The dairy product has also been considered a mystical salve during certain periods of history. For centuries, the people of Brittany placed butter near a person suffering from cancer to absorb the disease.

The first printed instructions for making butter can be traced back to a 14th-century Venetian cookbook. By the 17th century, butter was traded on routes that included England, Brittany, Flanders, and Iceland. The butter produced in Vanves, France, was thought to be the most exquisite during this era. In the southern regions of Europe, where olive oil remained the predominant cooking oil, some people believed butter 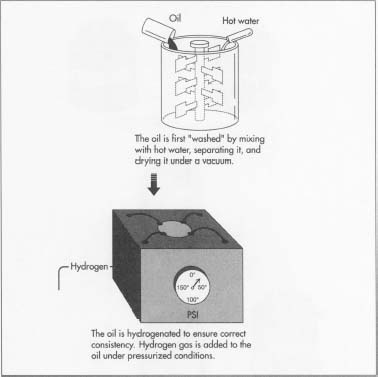 These illustrations show the commercial manufacture of margarine. Guidelines for margarine production dictate that margarine contain at least 80% fat. The oils used in the production can be derived from a variety of animal and vegetable sources. Its aqueous content maybe milk, water, or a soy-based protein fluid.

caused leprosy. The dairy product eventually became a prohibited item for fast days as decreed by the Roman Catholic Church, although a dispensation could be purchased for those who simply could not go without it. In Rouen, France, legend has it that a “butter tower” was financed solely by such dispensations granted for eating butter on fast days.

Butter manufacturing in the U.S. dates from the time of the first colonists who brought cows with them to North America. Families who owned their own cows usually made butter themselves. Milk from the cow was left alone until its cream rose to the top. The cream was then skimmed off and left to cool, and the temperature was raised to about 70°F (21°C) a day before the butter making process was to begin. Heating the cream ripened it, and it was then cooled several degrees. Next, the cream was placed in a wooden device, sometimes barrel-shaped or otherwise cylindrical, and mixed with the help of a paddle. This process generally took at least 30 minutes. The leftover cream in the churn was buttermilk. If the cows were eating grass, the butter possessed a yellowish cast, but during winter, when they were getting other types of feed, it was white. The butter was then rinsed with cool water, “worked over” a bit more, then salted for taste.

Margarine is similar in taste and appearance to butter but possesses several distinct differences. Margarine was developed as a substitute for butter. By the 19th century, butter had become a common staple in the diet of people who lived off the land but was expensive for those who did not. Louis Napoleon III, a socialist-minded emperor of mid-century France, offered a reward to anyone who could produce an acceptable, 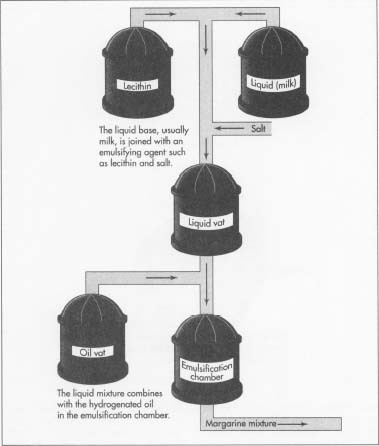 The continuous-How process is the most commonly used method in the manufacture of margarine. If milk is used as the liquid base, it is joined with salt and an emulsifying agent in a chamber. An emulsifier works by decreasing the surface tension between the oil globules and the liquid mixture, thereby helping them form chemical bonds more easily. The result is a substance that is neither wholly liquid nor wholly solid.

affordable alternative. Hippolyte Mege-Mouriez won the 1869 competition for the item he named margarine after its primary ingredient, margaric acid. The margaric acid had only recently been discovered in 1813 by Michael Eugene Chevreul and derived its name from the Greek term for pearls, margarite, because of the milky drops that Chevreul noticed in his invention. In modern times it is manufactured from an oil or combination of oils through the process of hydrogenation, a method perfected around 1910. This process helps animal or vegetable oils emulsify, or turn from a liquid substance into a fatty one of a semi-solid state.

In the U.S., butter was the preferred taste for many years, and until relatively recent times, margarine suffered from a poor brand image. A well-organized dairy cartel campaigned against margarine, fearing competition from the margarine industry. In about 1950, Congress repealed taxes on butter substitutes which had been in effect for several decades. The so-called “Margarine Act” was also heralded for at last defining margarine: “all substances, mixtures and compounds which have a consistency similar to that of butter and which contain any edible fats and oils other than milk fat if made in imitation or semblance of butter.” Part of margarine’s acceptance into the diets of Europeans and Americans came from rationing during times of war. Butter was scarce, and margarine, or oleo, was the best substitute. Today, margarine

Since the 1930s, the Votator has been the most commonly used apparatus in U.S. margarine manufacturing. In the Votator, the margarine emulsion is cooled and occasionally agitated to form semi-solid margarine.

has become a nearly interchangeable substitute for butter and provides less fat and cholesterol than butter at a lower cost.

Butter is made from dairy milk and salt. Margarine, on the other hand, can be made from a variety of substances. The first of these is any edible animal or vegetable oil such as corn oil or sunflower oil. Its liquid component can be made from milk, water, or sometimes a liquid protein mixture derived from soybean.

Margarine can be made from a variety of animal fats and was once predominantly manufactured from beef fat and called oleo-margarine. Unlike butter, it can be packaged into a variety of consistencies, including liquid. No matter what the form, however, margarine must meet strict government content standards because it is a food item that government analysts and nutritionists consider to be easily confused with butter. These guidelines dictate that margarine be at least 80% fat, derived from animal or vegetable oils, or sometimes a blend of the two. Around 17-18.5% of the margarine is liquid, derived from either pasteurized skim milk, water, or soybean protein fluid. A slight percentage (1-3%) is salt added for flavour, but in the interest of dietary health, some margarine is made and labelled salt-free. It must contain at least 15,000 units (from the U.S. Pharmacopeia standards) of vitamin A per pound. Other ingredients may be added to preserve shelf life.

The continuous-flow process is the most commonly used method in the manufacture of margarine. If milk is used as the liquid base, it is joined with salt and an emulsifying agent in a chamber. The emulsifying agent ensures that the emulsification process—chemically defined as a suspension of small globules of one liquid in a second liquid—takes place. An emulsifier works by decreasing the surface tension between the oil globules and the liquid mixture, thereby helping them form chemical bonds more easily. The result is a substance that is neither wholly liquid nor wholly solid but rather a combination of the two called semi-solid. Lecithin, a natural fat derived from egg yolk, soybean, or corn, is one typical emulsification agent used in margarine manufacturing.

Quality control is an obvious concern at modern food-processing facilities. Unclean equipment and shoddy methodology can lead to a mass bacterial contamination that could disrupt the stomachs and even the lives of thousands of consumers within a matter of days. The U.S. government, under the auspices of the Department of Agriculture, maintain specific industrial hygiene codes for modern creameries and margarine manufacturing plants. Inspections and fines for poorly maintained equipment or unclean conditions help keep companies in compliance.

Butter is graded by USDA inspectors at the creamery. They inspect each batch, test it, taste it, and assign a score to it. They give a maximum of 45 points for flavour, 25 for body and texture, 15 points for colour, 10 for salt content, and 5 for packaging. Thus, a perfect batch of butter can receive a score of 100 points, but usually, the highest number assigned to a package is 93. At 93, butter is classified and labelled Grade AA; a batch that receives a score below 90 is considered inferior.

Guidelines for margarine production dictate that margarine contain at least 80% fat. The oils used in the production can be derived from a variety of animal and vegetable sources but all must be fit for human consumption. Its aqueous content maybe milk, water, or a soy-based protein fluid. It must be pasteurized and contain at least 15,000 units of vitamin A. It may also contain a salt substitute, sweeteners, fatty emulsifiers, preservatives, vitamin D, and colouring agents.